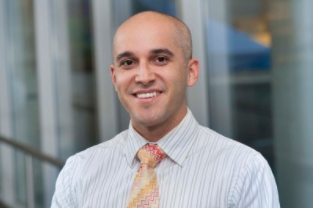 Nelson F. Sanchez was born in New York City and raised in the Bronx. He has a bachelor's degree from Brown University and a medical degree from NYU's School of Medicine. He completed his internal medicine residency at NYU Medical Center in 2008 and currently works as a hospitalist at Memorial Sloan Kettering Cancer Center in New York City.

During his medical training, Nelson conducted research exploring LGBT health and health care. He completed research on medical students' attitudes and clinical experiences with gay, lesbian and transgender patients, and New York City transgender residents' access to medical care and hormone therapies. His research has been published in various journals, including Family Medicine, LGBT Health, and the American Journal of Public Health. At Weill Cornell, he currently leads the Safe Zone LGBT Allies Training Workshops, he chairs the LGBT Steering Committee, and he leads a medical student elective on LGBT health research and education. Additionally, he chairs the annual LGBT Health Workforce Conference.

Kartik Viswanathan was born and raised in India before migrating to Michigan where he received a bachelor's degree from Michigan State University. He completed his doctoral degree in Cancer Biology at Stanford University and is currently a medical student at Weill Cornell Medical College. At WCMC, he was one of the co-chairs for the LGBT Students in Science and Medicine group, and he is actively involved in increasing awareness of LGBT health issues among medical students with the eventual goal of incorporating LGBT materials within the medical school curriculum.

"I have been employed as a nurse at the hospital and have been "out and proud" on the job for twenty years, and my life partner and I were the third couple in New York City to apply for domestic partner status in 1993. When he became unable to work several years later due to medical problems we appealed to the hospital's Board of Directors to seek health care benefits. At that time there was no precedent for us. Two months later I was called by a hospital executive offering health care benefits not only to us but to all employees in domestic partner relationships. We were thrilled, relieved, and grateful that the Board of Directors made this progressive decision in our favor! The validation of our relationship propelled me to continue my work as a psychiatric nurse here at the Weill Cornell Campus."

"I started working here in 2002, and I've always appreciated the open and welcoming environment that Weill Cornell Medicine creates for all its staff, including those who are LGBT. Over the past few years, I've been excited to see the queer presence on campus becoming even more visible. It's great to know that Weill Cornell Medicine is committed to the health of its LGBT patients and to the needs of its LGBT staff, faculty, and students."